Lewisa
I am an adventure junkie and have traversed many. I am very passionate about many things and strive to bring magic and beauty to the world. I simply love life and the impending adventure set within a new day as I arise. Everyday I find at least one thing to be grateful for...there's so much!

Another piece for the Alwun House show in February 2014.

Posted by Lewisa at 6:56 PM No comments:

I used to do Bas Reliefs many moons ago. I then worked at the 3D aspect of my sculptures knowing that when I returned to Bas Relief it could be the end of my full 3D sculptures because I love creating these reliefs so much. Here is the first of my possible downfall from full sculptures :/ She represents the expression of enlightenment and containment of all we have learned as souls on this plane and our striving for the higher natures and aspects that beckon us. Her back is actually quite arched and off of the board behind her. She is paper clay adorned with watercolor and 24K gold leaf. The photos just don't do her justice sadly.

Posted by Lewisa at 1:12 PM No comments:


I am into metamorphosis these days. I am focused on the animal kingdom and our division and the importance of closing that gap. We have so much to learn from nature and we are supposed to be one with nature. It is only ego from which we choose to separate ourselves from the nature that we have, we are and the four leggeds, winged and finned that share this world with us. SHARE this world with us, we who choose to dominate the world, disrespect and abuse our fellow brethren. This piece is a WIP, she doesn't have toes yet and she's been in my que for so long now I didn't want to wait any longer to put something of her for display. It has been awhile since I have posted.
She has wings for her inner flight to freedom of the suppression of the egoic nature. The skull upon her head is the past of destruction of nature and yet our need to wear that which we disregard and disrespect yet hold so dear in its beauty such as furs. Our need to conquer and take, especially that of life which is so precious and not ours to do so. She is for an upcoming show. 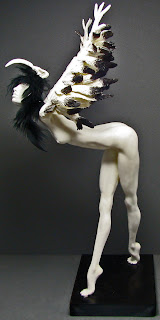 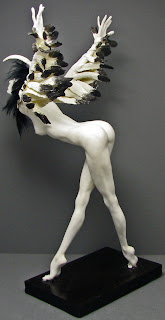 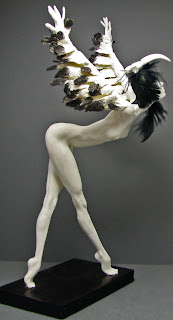 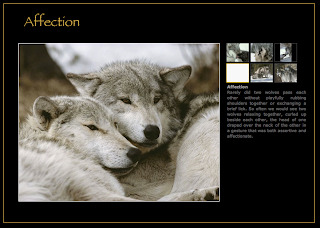 Photo by and belongs to Living With Wolves project, Jim and Jamie Dutcher.

I feel the urgent need to post this message to all who will listen about an ethnic cleansing that is happening here in the US. That of the sadistic slaughter of wolves. More and more my work is becoming reflective of the powerful connection and awareness that we are finally coming into about the animal kingdom, our abuse of it and how we really aren't the smart and certainly not the most conscious creatures on this planet. As a child our horse shoer had a wolf, Baree. I relished the days that Tom would come and bring his lupine friend. Then I would spend as much time playing hugging and just lying next to this gorgeous animal whom I trusted and loved with all my heart and he in turn offered me the biggest compliment a non human creature can-his trust. Tom was told he couldn't have a wolf in our county, actually probably the whole state, so rather than betray his dear friend by giving him up as most people would coldly do, he moved to one of the great northern states such as Montana, Idaho, Wyoming or Minnesota. Which one I don't remember but now it is those four states that have passed a bill allowing people to kill up to 16 wolves per season. I just read that out of 1700 wolves in Montana, there are only 1000 left due to this cleansing. A macho hunter with a trap and a gun is nothing but an insecure and fearful person. Argue as you will, it is a fact and it is shameful. Therapy might be suggested here. I try with all my heart to love these unconscious and frightened people. It is truly a challenge for me as they, in the most sadistic ways possible, trap, name and slaughter my childhood friends.

I ask that you go to this site, sign a petition, see a fabulous film and do what you can to help these lovely people with their most noble cause; http://www.takepart.com/article/2013/02/04/living-with-wolves?cmpid=tpanimals-eml-2013-2-08-baby
Posted by Lewisa at 8:54 AM No comments:

Fledgling is completed! I am so in love with the idea of metamorphosis of the animal natures that are our guardians and of traits we emulate. 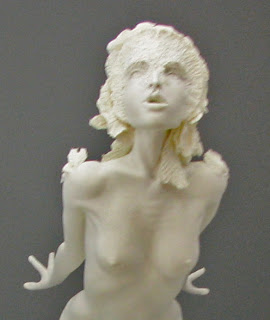 This piece is of the inner wise nature of the owl and how a soul incarnates in order to advance spiritually. This soul is but a fledgling coming into her own. This piece is 13" x 7".
Posted by Lewisa at 7:20 PM No comments:

I have a fascination with Orchids. They are amazingly sensual flowers. Years ago I did a Bas Relief with an image of an Orchid on the backside of a woman. I have always wanted to do one as a full sculpture and here she is. This image relates to a story I wrote of the Orchid Goddess which I am currently illustrating and plan to publish.
Posted by Lewisa at 7:07 PM No comments:

Black Crow Moon is one of my new gallery pieces. She is paperclay and stands almost 19" including her stand and the crows upon her antlers. She will remain in white with black crows and bronzed antlers. She is based on the Native American name for the full moon that signifies spring called Black Crow moon because after this full moon in March the crows come out and are very prevalent. We all love crows and the mysteries they hold. I have had so much fun working on this piece. She is my favorite so far :)
Posted by Lewisa at 10:39 AM 2 comments:

One of my first gallery pieces. 18" tall, stone paperclay.
Posted by Lewisa at 4:24 PM No comments:

I was listening to Erik Satie's Danseries-- a series of his compositions. I read about the one and only love he had whom he called Bique. He proposed to her the night he met her and he considered her his muse. It only lasted 6 months and then she just moved away, leaving his heart broken. His danseries are so light hearted and joyful and they feel like what he felt about her. This pose reminded me of the lyrical and playful quality of their love. I dressed her in white, representing the purity of their short affair, even though it was short lived. Better to have loved and lost...

An OOAK original fantasy doll. She stands 14" tall including her base. Her lovely hair is shorn mohair and her beautiful dress is handmade with 100% silk. She is made from paper clay which is in itself very strong and she as well has a wire armature. She is SOLD.
Posted by Lewisa at 8:57 AM 1 comment: